St. Albert is a city in Alberta, Canada, on the Sturgeon River northwest of the City of Edmonton and is know as "The Botanical Arts City". It was originally settled as a Métis community, and is now the second-largest city in the Edmonton Capital Region. St. Albert first received its town status in 1904 and was reached by the Canadian Northern Railway in 1906. 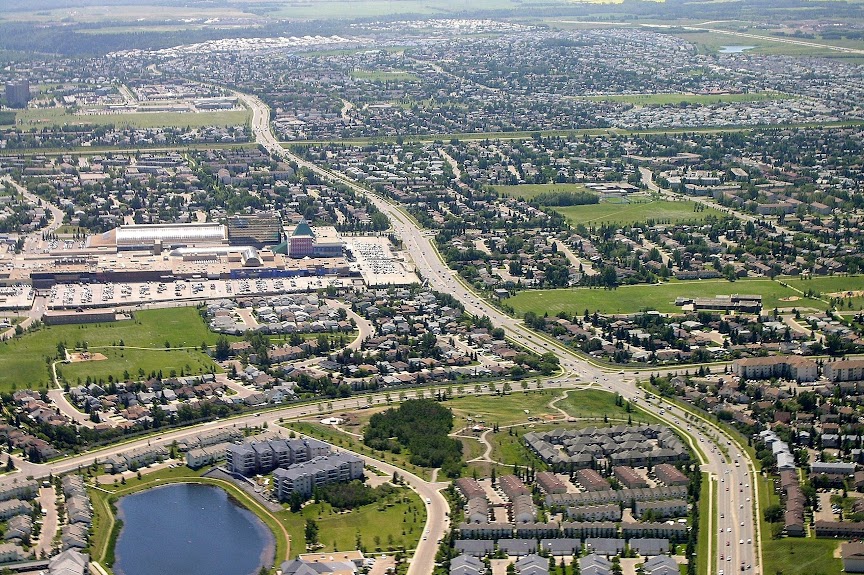 In St. Albert, the climate is cold and temperate. St. Albert has a significant amount of rainfall during the year, this is true even for the driest month, February with 17 mm of rainfall. With an average of 92 mm, the most precipitation falls in July. The average annual rainfall is 466 mm. The difference in precipitation between the driest month and the wettest month is 75 mm.

The City of St. Albert Coat of Arms/Crest

The City of St. Albert crest was developed in 1967 as a centennial project. It is used exclusively for legislative purposes by the City. It appears on the letterhead of the Office of the Mayor, invitations
extended by Council, official plaques, and is included in the design of St. Albert’s flag.

On the crest is a stylized cross, signifying Father Lacombe’s mission. The sky and hills portray the scenic surroundings of St. Albert and the wavy band the Sturgeon River. Spruce trees show the lumber with which the settlement was built and the wheat symbolizes the agriculture basis of the economy of the early days.

“In Omnibus Respice Finem”, meaning “in everything you do look to the end,” is the motto of St. Albert.

Questions regarding the use of the crest, the flag and the motto should be directed to the City Manager’s Office.

The City of St. Albert Flag

St. Albert’s flag was chosen by the residents in a ballot and was officially approved by Council in 1980. The description provided by
the designer is as follows: “In abstract design, the blue and white, the colours of Quebec, recall the Métis and Francophones who were the first settlers in St. Albert. The traditional colours of Britain, red, white and blue, symbolize the many Anglophones who contributed to the expansion of the community’.

The logo, as shown at left, was adopted by the City in 1977 and was used exclusively until 2010 when a new logo (see Figure 4, below) was adopted. The use and display of the old logo will be gradually phased out over time as new products featuring the new logo replace those with the old logo. As such, this logo will still be in use after the introduction of the new logo in 2010.

The City of St. Albert Logo

The City of St. Albert Secondary Logo
The Leaf Icon

Of the population aged 25 years and over in St. Albert, 31.7% had a university certificate or degree. An additional 24.3% had a college diploma and 11.6% had a trades certificate.

The share of the adult population that had completed a high school diploma as their highest level of educational attainment was 23.7%, and 8.8% had completed neither high school nor any postsecondary certificates, diplomas or degrees.

Ensuring residents of all ages have the best education opportunities available is a priority for St. Albert.  The city includes a range of school options to meet the needs of students

Elementary, Junior High and High School education is available through the Catholic and Francophone school boards, and St. Albert Public School District #5565, which offer outstanding programs that include education in the classroom and opportunities for learning at venues like museums, recreation facilities and art studios.

Post-secondary schooling is offered nearby;  Athabasca University, the University of Alberta, NAIT and MacEwan University are all accessible by direct bus routes and roadways.

NHL ice hockey player Jarome Iginla is from St. Albert. He played his entire minor hockey career in the St. Albert Minor Hockey Association, which included stints with the Bantam AAA Sabres and the Midget AAA Raiders. It was during the 1992-93 season with the Raiders that Iginla, then an under-age midget player, scored 87 points to lead the Alberta Midget AAA Hockey league in scoring. Following this season Iginla joined the Kamloops Blazers as a 16-year-old.

St. Albert recently added an artificial turf field in Riel Park as the home of every minor team in the city. Former University of Calgary and current Montreal Alouettes Slot Back, Chris Dobko was born and raised in St. Albert

Your Must See & Do Guide

No day trip is complete without a bit of shopping but for some, shopping is what it’s all about.  If this describes you, St. Albert will not disappoint.

There are one-of-a-kind shops throughout the city where you can find unique treasures for you closet, home or garden.

The Perron District in downtown St. Albert offers a great selection of boutiques and cafes.  St. Albert Centre, is the city’s largest mall and has over 60 stores and services.  Other local gems will complete your unique shopping experience.  Search the business directory or ask a resident about their favourites.

Every Saturday from mid-June to Thanksgiving, St. Albert hosts the largest outdoor farmers’ market in western Canada. There is a huge selection of baking, crafts, vegetables, fruit and more along with street performers and entertainment for the whole family.

The Perron District is in the heart of downtown St. Albert.  Here you will find a great selection of boutiques and cafes.   You can find designer clothing, unique giftware and hand-made artisan collections.

Every Saturday from mid-June to mid-October, St. Albert hosts the largest outdoor farmers’ market in western Canada. There is a huge selection of baking, crafts, vegetables, fruit and more along with street performers and entertainment for the whole family.

The Enjoy Centre is more than a store; it’s a destination.  You’ll discover boutiques, food and wine, a spa, restaurant, garden centre - even an event space.  Soaring glass ceilings provide a breathtaking view of the prairie sky making it the perfect venue for an inspired day of shopping.  Fashion, entertainment, food, art, plants - everything you need in one location.

Fresh fruit, fine woodworking, ripe-off-the-vine vegetables, home baking, beautiful flowers and hand sewn works of art. These are some of the great buys found at western Canada's largest outdoor Farmers' Market. Every Saturday from 10am - 3pm starting June 13, 2015 to October 10, 2015, downtown St. Albert is transformed into a unique outdoor social and shopping extravaganza where buskers and musicians create a carnival atmosphere.

Along St. Albert Trail is the bulk of shopping opportunities. St. Albert Centre, the city’s largest mall has over 60 stores and services. On either side of the Trail is a great mix of independent, family owned shops and the staple big box stores. Want to try something new? Head west along McKenney Drive to Mission Ridge Plaza to purchase gifts or home accessories,fashion accessories or stock up on your quilting needs.  East of St. Albert Trail on Bellerose Drive is the newest shopping destination Shops at Boudreau.

Showcasing the members of:

St. Albert Transit strives to provide optimal, affordable and accessible service to its customers for travel within St. Albert and to key commuter destinations in Edmonton.

The History of St. Albert Transit

Historically, there was once an inter-urban railway that operated between St. Albert and Calder in Edmonton. The service began in 1913 but on April 1, 1914 the storage barn was destroyed by fire and the service never resumed.

The Town of St. Albert assumed the responsibility for transit provision in 1974. Edmonton Transit System was contracted to operate 3 buses to Edmonton during peak hours (fare $0.50), carrying around 300 people daily. In 1976 the Town of St. Albert purchased 10 regular transit buses and commenced service to the U of A. Briggs Bus Lines provided local service using 8 yellow school buses, under contract.

On July 2, 1986 St. Albert Transit services began, following the construction of a transit garage in the Campbell Industrial Park. The City of St. Albert now owned and could administer, maintain and shelter its fleet. Grey Goose Bus Lines were contracted to provide drivers for the service. At this time the bus fleet comprised 23 GMC 'New Look' transit buses, painted in the red, blue and white livery.

The Sturgeon Community Hospital provides a wide variety of health services to the community of St. Albert and surrounding area. As a community hospital, the Sturgeon's focus is on providing the best care in a comfortable, modern and friendly setting. Care provided includes emergency, women's health, cardiac care, surgery, medicine, pediatrics, and rehabilitation.

St. Albert celebrates a rich history that dates back over 150 years and has often been called Alberta's Finest City. Founded in 1861 by Father Albert Lacombe, St. Albert is the oldest, non-fortified community in Alberta and was the largest agricultural settlement west of Winnipeg.

Father Lacombe, one of the earliest missionaries in the west, proclaimed Mission Hill home to the St. Albert mission settlement. He built a log chapel for ministering to the Cree and Métis. Father Lacombe Chapel, the oldest building in Alberta, is now a Provincial Heritage Site and has been restored to its original appearance. It is located on the north hill of the river and is open to tours from June to September.

Today, St. Albert is a bustling city with over 64,645 residents. With more than 85 kilometres of trails, 1,100 acres of green space, the Arden Theatre, the visual arts studios, the Musée Héritage Museum and numerous special events - it's easy to see why St. Albert is renowned for its rich heritage, artistic community, and natural environment.

I make myself available at all times. My web site is here to help you 24 hours a day. You can search listings at your own convenience, browse reports, and read up on real estate info on your own terms. When you are ready to see a listing in person, or just have a simple question, please don't hesitate to contact me!